The right choice of rubber granulate is key to your success

The right choice of rubber granulate is key to the success of synthetic turf fields, sports tracks and playground surfaces. Working with leading contractors and specialists, Genan supplies high quality rubber granulate for all of these applications.

for your sports or leisure solution, you opt for:

Genan granules – or GENAN SAFE rubber pellets – are used in playground base layers to ensure a safe environment for active and adventurous children. Shock-absorbing rubber surfacing makes playgrounds softer. This means that children are much less likely to injure themselves than on playgrounds with conventional surfaces.

Genan products comply with EU regulations
To make playgrounds as safe as possible, the EU has issued standards for the elasticity of the surface that public playgrounds must comply with. These regulations are found in EU Directives EN 1176 and EN 1177.

A playground surface made from rubber granulate or pellets is more healthy for children compared to sand, gravel or wooden chips. A rubber surface is much easier to keep clean, and problems with e.g. hidden, left-behind needles and broken glass can be avoided.

Establishing the playground surface
Playgrounds are often made in-situ. Rubber granules or pellets are mixed with polyurethane and the playground or track is built on the spot. There are many examples of playgrounds in exciting shapes, designs and colors. Playgrounds may also be made of pre-fab tiles produced by the rubber industry, using rubber granulate as source material.

GENAN SAFE pellets are homogeneous rubber pellets. The diameter of GENAN PELLETS 4.2 / 5 is Ø4.2 mm, and these pellets are 5 mm long.

In a typical sports surface application, Genan granulate is used for the elastic, shock-absorbing base layer under a colored top layer.

Genan’s high-quality rubber granulate is used for athletic tracks, running tracks and smaller fields for e.g. basketball, as well as tennis courts and other sports fields.

Athletic tracks are often made in-situ. Rubber granules are mixed with polyurethane, and the track or pitch is built on site.

Rubber granulate for track applications is offered in two standard sizes: MEDIUM and COARSE. Particle size distribution is important as it influences performance as well as installation costs. A poor quality product contains too much dust and textile and will often require more costly binding material to achieve the same properties.

When applied as top layer at both indoor and outdoor riding arenas, GENAN ULTRA COARSE offers many advantages.

Only little maintenance is required, and the product life of the arena is long, as rubber granulate is extremely durable and withstands even rough weather conditions very well.

In comparison to riding arenas with either grass, sand or wood chip surfaces, conditions are far better on both rainy days and on days with temperatures below freezing. And on hot, dry days, dust nuisance is far less.

A top layer of recycled crumb rubber provides a resilient, shock-absorbing surface, offering less strain to joints and tendons and reducing hoof wear. And should the rider fall off, a softer landing is ensured on the elastic rubber layer.

In typical synthetic turf, Genan rubber granules are applied in both the infill layer (FINE, FINE/MIX or MEDIUM rubber granulate) and the manufacturing of the e-layer (COARSE, SUPER COARSE or ULTRA COARSE rubber granulate). E-layers may be installed in-situ or made of pre-fab mats.

Synthetic turf fields are fully accepted by the major soccer organizations FIFA and UEFA – and now officially recommended for use at all levels, including Champions League and the World Cup. Depending on the level of play, infill specifications may differ. 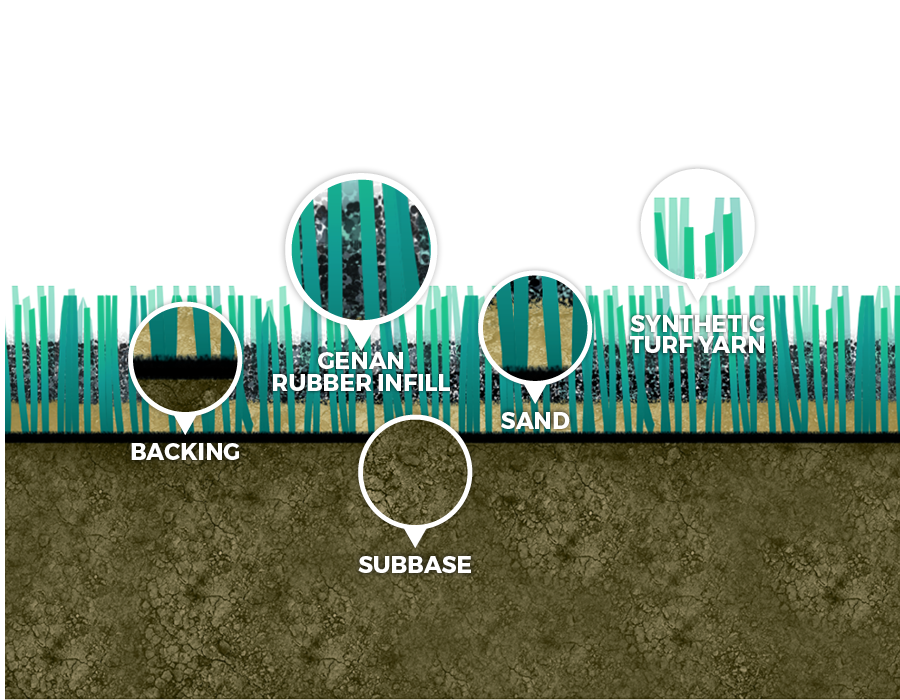 INFILL IS THE MOST IMPORT FACTOR INFLUENCING BALL BEHAVIOR IN SYNTHETIC TURF
Although infill accounts for only a minor share of the total cost of a synthetic turf project, it is possibly the most important element. Infill quality is paramount for meeting pitch performance criteria, which means that infill quality is an extremely important aspect for the image and perception of the artificial turf in use.

INFILL CAN IMPROVE BALL REBOUND AND RUNNING CHARACTERISTICS
To ensure optimum ball behavior, the size of rubber granules must neither be too fine nor too coarse. If the infill is too fine, it will compact and the synthetic turf will not be elastic enough. If the infill is too coarse, it will absorb too much energy from the ball, resulting in poor rebound performance and splashing. To meet all special requirements, Genan therefore offers three infill sizes: FINE, FINE/MIX and MEDIUM.

MAINTENANCE
To uphold the superior characteristics of synthetic turf fields, such as elasticity, weather resistance and extremely good aging properties, infill is also used in field maintenance. Maintenance costs are low and ball behavior is outstanding.

MAINTENANCE COSTS ARE LOW AND BALL BEHAVIOR IS OUTSTANDING

Sublayer is an elastic layer, also known as e-layer, that boasts long-lasting elasticity. Sublayer is used underneath the carpet in some artificial turf systems. The sublayer is made of rubber granulate and polyurethane binder. Genan offers rubber granulate for sublayers in three standard sizes: COARSE, SUPER COARSE and ULTRA COARSE.

There are two main ways of making the elastic layer. An elastic layer can either be built in-situ – where rubber granules are mixed with 8-12% polyurethane binder – or made of pre-fabricated rubber mats. In both applications, Genan high-quality rubber granulate is used.

RUBBER FROM SCRAP TIRES IS IDEAL FOR E-LAYERS

Coarse rubber granulate is a superior material used for elastic layers, as the elastic properties in rubber from scrap tires are the very best available on the market. Several decades of research in the tire industry has resulted in the development of a long-lasting, elastic material that is ideal for this particular purpose.

Do soccer players get turf burns if they make sliding tackles?

No. Turf burns were one of the problems with the first two generations of synthetic turf. However, third generation turf technology has solved this problem.

Do soccer players get scratches from steel in the infill?

No, Genan infill is clean and free from steel contamination.

Is there a risk of water contamination from a synthetic turf field?

A recent, international literature study made by the Danish Technological Institute (DTI) estimates the annual discharge to the aquatic environment to be in the 2.5-36 kg per pitch per annum interval. By following best practice guidelines on field design, maintenance as well as behavior / routines and habits of players and maintenance personnel, these limited quantities can be reduced to almost nothing.

How should a synthetic turf field be designed, used and maintained in order to avoid spreading of infill to the environment?

Genan recommends the installation of barriers / infill fencing panels around synthetic turf fields – as well as “catch areas” with special mats along all four sides. Fields must be properly fenced in, with only a few entrances, and each entrance should have a clean-down exit area, where players are required to brush off their clothes and empty their shoes. In connection with field maintenance, special brushes must be used – and these brushes should only be used for this particular purpose.

Is the ball rebound the same as on natural turf?

The specification of synthetic turf is composed in order to simulate exactly the same rebound as on natural turf.

Are passes between players faster or slower on a synthetic turf field?

Why has FIFA included synthetic turf in its recommendations?

Synthetic turf is an economical solution because the turf can be used much more than natural turf. It can be played on all year round, regardless of weather conditions, and fields do not have to rest between matches as natural turf fields do, i.e. to protect the grass. Maintenance costs are much lower than for natural turf, and dependency on natural resources e.g. water is usually eliminated.
Another very important issue for FIFA is the development of good soccer standards in the third world. In third-world countries, there are often insufficient resources to maintain natural turf fields, e.g. a lack of water and low maintenance budget. Artificial turf opens up for the development of many young talents in poor countries.

Can you play all year round on a synthetic turf pitch?

Yes. The only requirement is to remove snow.

What does it cost to maintain a synthetic turf pitch compared to natural turf?

Maintenance costs vary depending on local geography. As a rule of thumb, the more extreme the climate, the more you save by having synthetic turf. In very cold and very dry climates, savings are enormous. Savings are considerable everywhere.

Is it true that both ball and players get dusty when playing on a synthetic turf pitch?

Numerous scientific studies – both historic and recent – have established that rubber infill made from end-of-life tires does not pose any elevated health risk. In February 2017, the European Chemical Agency published its findings in a new, comprehensive study. ECHA “has found no reason to advise people against playing sports on synthetic turf containing recycled rubber granules as infill material”. This advice is based on ECHA’S evaluation “that there is a very low level of concern from exposure to substances found in the granules.

Copyright 2017 - Designed by Hive and developed by Convince
By continuing to browse our website, you accept our use of cookies. Find out more.